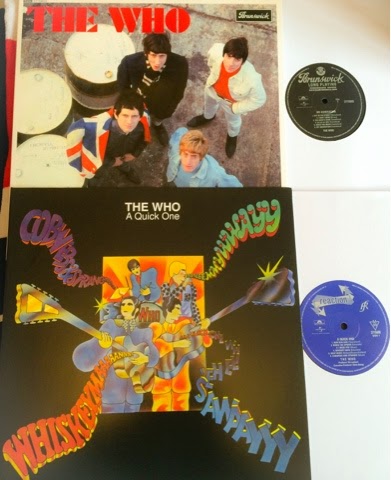 After some time away in the heat of Florida with nothing to show but some Wilco & Spoon lps, it’s time to get back to it.

As a follow on from my extensive (possibly over extensive) diatribe on the Who releases, I’ve listened to the first two reissues – My Generation & A Quick One While He’s Away.

As with all they latest Who LP reissues, these have been pressed at GZ and look great, although lack some of the originals craftsmanship. The sleeves look good, albeit with the tell-tale barcodes & the labels are authentic although missing the textured labels.

My Generation is in mono and A/B’ed with an original first pressing sounds identical with no evidence of digital jiggery-pokery. In my view, both of these versions aren’t quite as “sweet” as the Virgin reissue from 1980, which has some extra bottom end and clarity, the drums in particular sound “meatier”. Still this re-issue is on superquiet vinyl and sounds as it did when it was first re-leased. We’re off to a flying start.

A Quick One While He’s Away is also in mono, in a back to back shootout with an original pressing I prefer this re-issue. From this point to pre Who’s Next, musical fidelity was never foremost on the minds of the band or producers Lambert & Stamp, this re-issue seems to have more bass clarity than the original. Although I still prefer the stereo (yes I know!) version on the Phases boxset, this is another triumph, again on superquiet vinyl.

I think that's a green light for other Who re-issues. Watch this space!