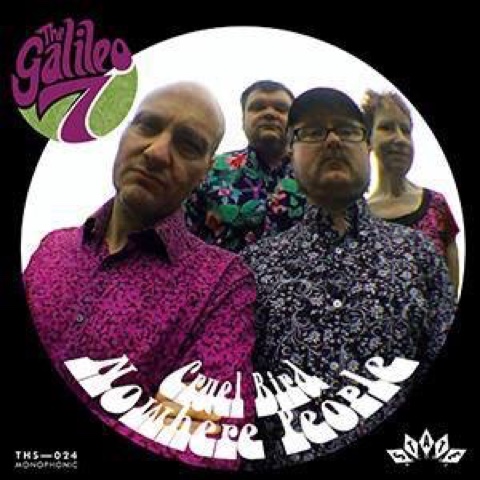 The 28th of March sees the release of the new single by The Galileo 7, Cruel Bird c/w Nowhere People, the live(ish) album Live-O-Graphic closely followed by the start of a ten date French tour. 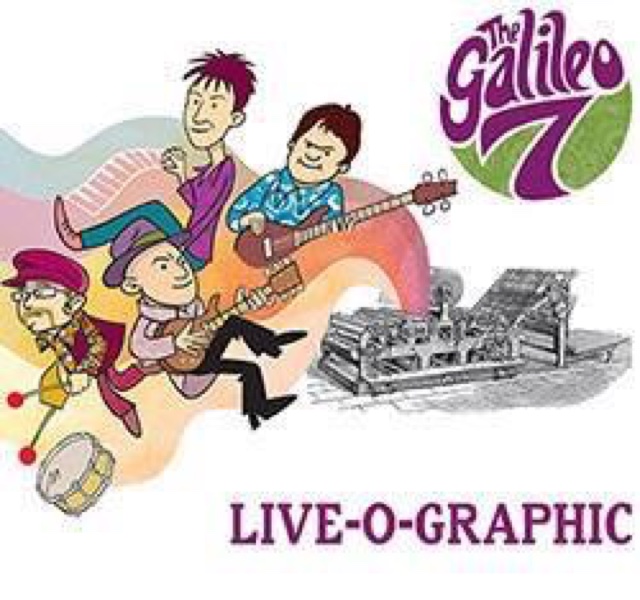 To order these please visit the Galileo 7 website http://www.thegalileo7.fourfour.com/ 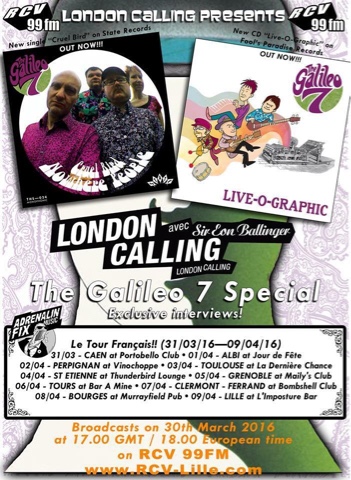 Followed by a "homecoming" date at The Moth Club in London on April 16th with The Masonics & Mindreaders. 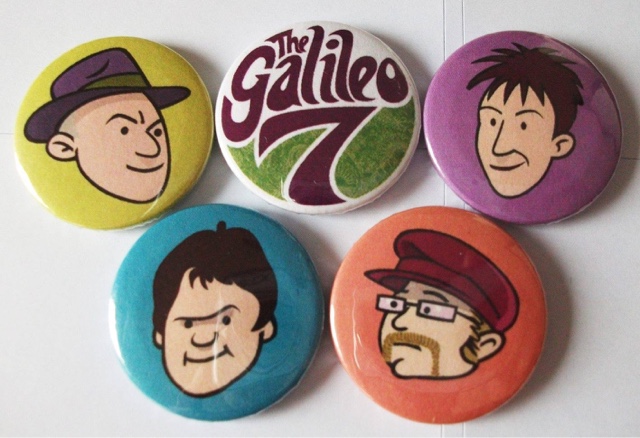 And we have badges.

Email ThisBlogThis!Share to TwitterShare to FacebookShare to Pinterest
Labels: The Galileo 7 vinyl records

You would like to think that if in the second half of the sixties, your band got a support slot with Jimi Hendrix, a regular spot at the Marquee Club in Wardour Street, a Billboard Magazine review that screams “This band will be a giant”, cited as a big influence by Rick Wakeman & Keith Emerson, name checked by David Bowie & Pete Townsend, oh, and signed by Brian Epstein, that your place would be reserved in the Rock & Roll hall of fame. 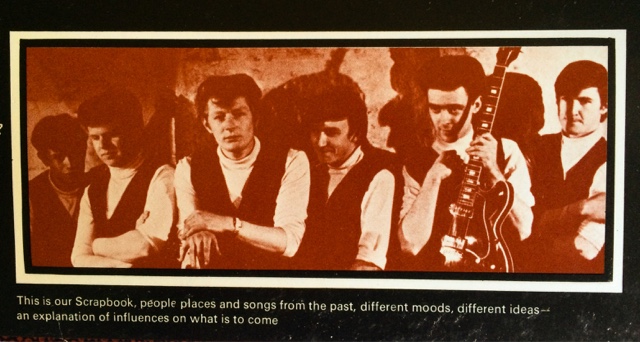 Scotland 1964 - The Premiers were a soul band that included Ian Ellis (vocals) and Harry Hughes (drums) that were well known on the circuit. In an effort to boost their success they added Billy Ritchie on organ, who’s busy and flamboyant musicianship quickly rubbed the other musicians up the wrong way causing their departure, thus leaving just Ian, Harry, Billy and a rather large dilemma. 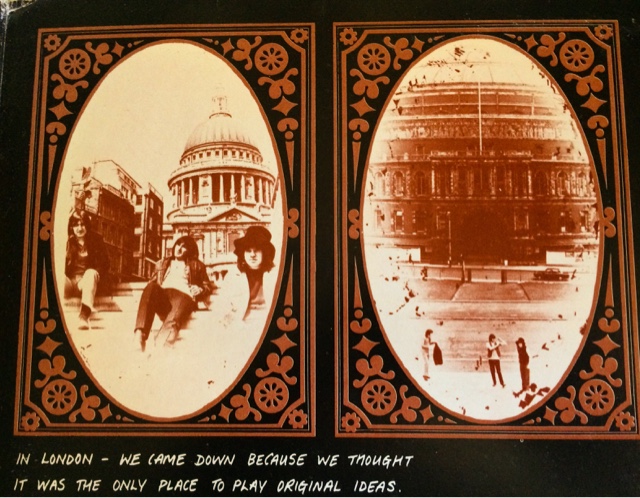 London 1966 – Ian Ellis had moved to bass, the trio had moved to London and renamed themselves 1-2-3. While their new line-up and style had not worked on the Scottish Club circuit, they were quickly absorbed into the London scene and signed to Brian Epstein’s NEMS management company.


London 1967 – Following the death of Brian Epstein, Robert Stigwood takes control of NEMS and decides to send 1-2-3 on a cabaret tour of North England, fitting in around comedians, ventriloquists & jugglers. 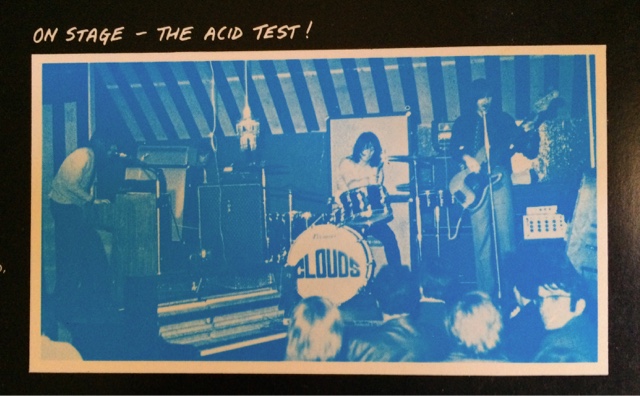 So on returning to London and seeing The Nice steal their thunder must have been almost as depressing as sharing a dingy Sheffield club dressing room with a comedy balloonist. Their fortune seemed on the upturn after being signed by future Chrysalis Label partner Terry Ellis who changed their name to Clouds.


Their first single, released on Island in 1969 is the very hard to come by “Make No Bones About It”, a superb pop song backed by the proto-prog “Heritage”.


Despite successful American tours and three superb albums, by 1971 Chrysalis were putting all their effort into Jethro Tull and the Clouds parted. 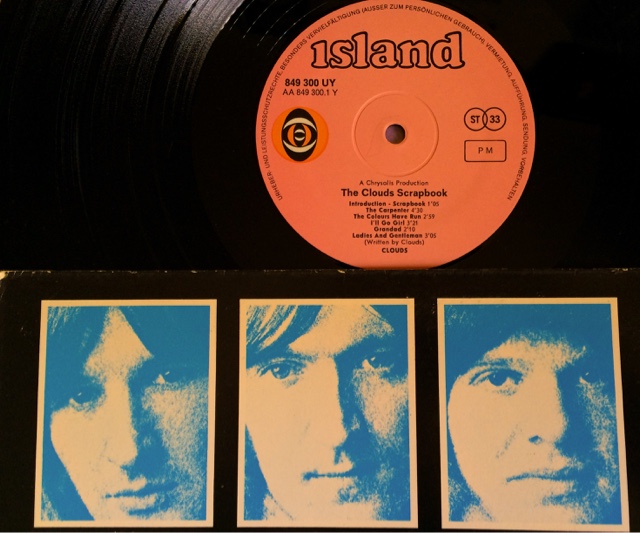 1-2-3 has since been given a re-appraisal by Music magazines (for whatever that’s worth) for their precursory influence on progressive rock. The only official release is on “Up Above our Heads - Clouds 1966-71 2CD anthology” as a bonus track. Recorded live at The Marquee, 1-2-3’s version of Paul Simon’s “America” was recorded a year before it was released on Simon & Garfunkel’s “Bookends”. Paul had originally recorded a demo in London which passed to 1-2-3 by studio engineer Stu Francis, along with “Sound Of Silence” they performed this at the Marquee Club in April 1967. In the audience was Yes vocalist Jon Anderson, who would use this arrangement on their own version several years later. 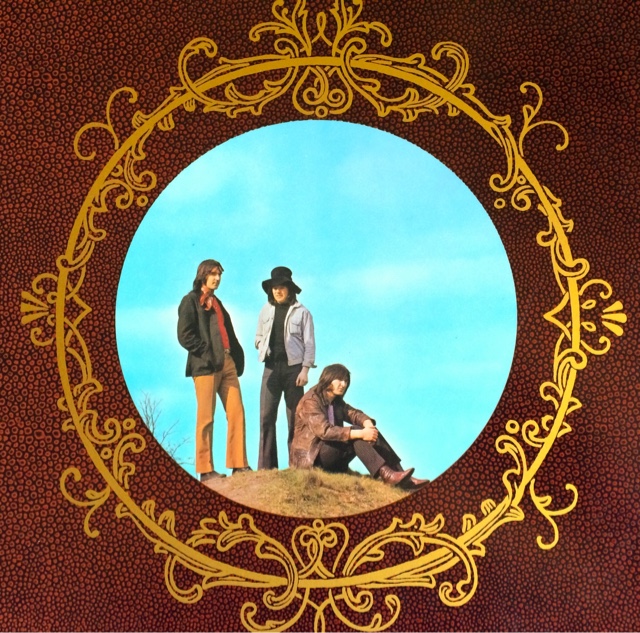 It’s a shame Clouds do not have the same rock mag pass, the 2 CD anthology shows them to have a superb collection of songs, smartly captured with some great performances. 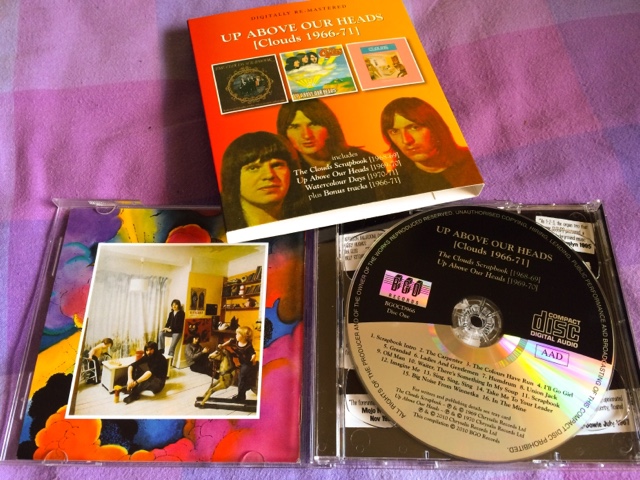 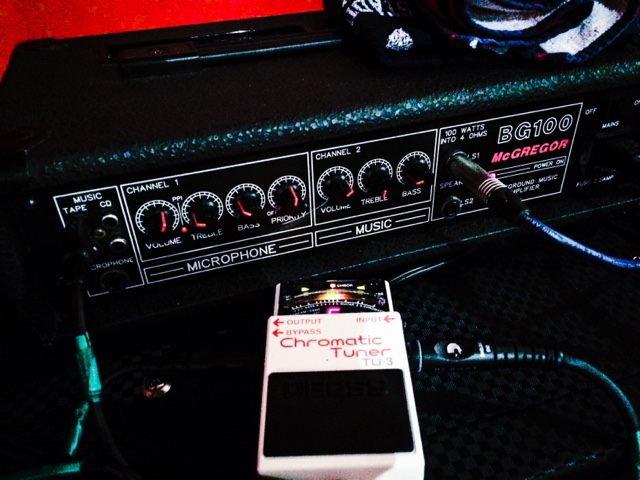 After years of telling people I won't plug into sound limiters, welcome to the McGregor £15 100 watt amp. It sounds like a bag of farts but if you don't care about my equipment, I don't care about what you have to listen to.

I have no problem playing quietly, in fact I'm happier performing at lower volume. I've even had shows where I can't hear what I'm playing over people talking, but if I get paid I'm fine with it.

What I object to is the arbitrary cutting of power to my equipment which in the past has damaged it and left me a huge bill to cover. The last time this happened was about ten years ago, not because I was playing at any sort of volume (this was the aforementioned can't hear myself over the talking scenario) but every time someone shouted or laughed the power cut off.

Cutting the power to an amp means the fan stops working, this stops keeping the power sink cool and can cause damage, which is what happened to me.

So please, keep the sound / noise indicators, ask the band to keep below it or even better give them a contract that means they won't get paid if thier music exceeds the levels, rather than destroying thier equipment. 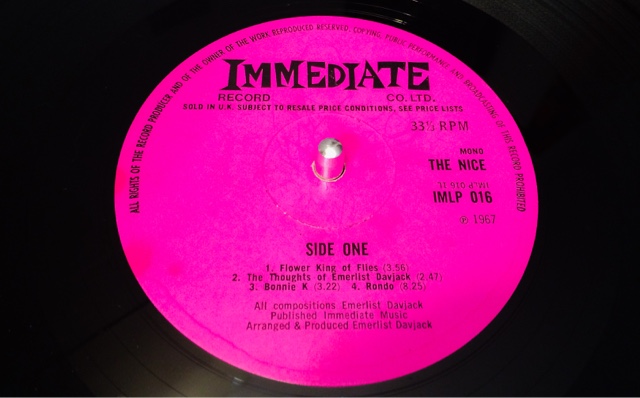 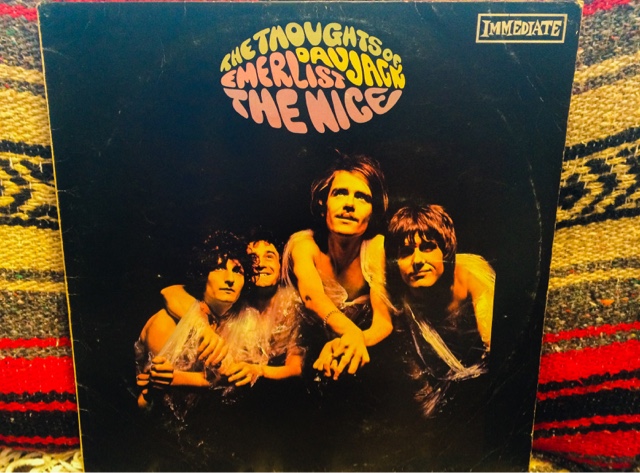 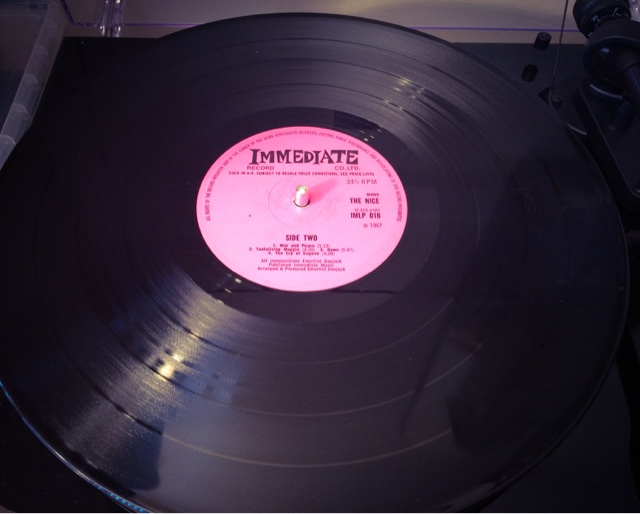 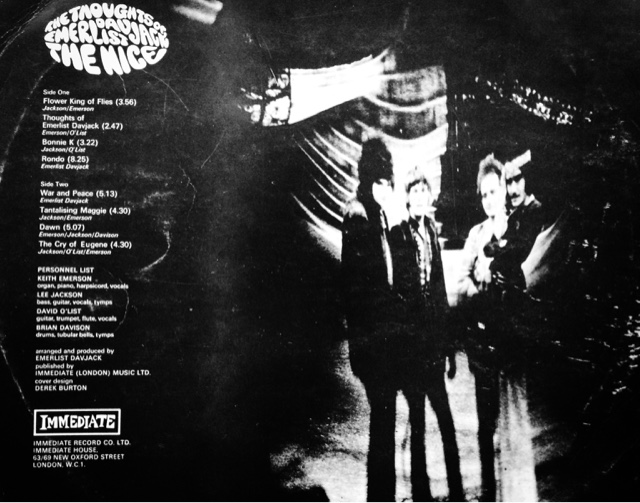 Sir George Martin - All Quiet On The Mersey Front 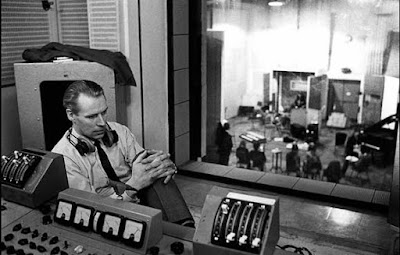 Of all the well known producers that have graced recording studios over the last 100 years, none can compare to the exhaustive résumé of Sir George Martin, who sadly passed away yesterday aged 90.

George will always be synonymous with The Fab Four, but even before George Harrison insulted his tie, Martin had successfully turned round the fortunes of the Parlophone arm of EMI. Taking over  as A&R Manager of what was regarded as a label for EMI's insignificant acts in 1955, Martin had released a discography of hugely successful comedy acts from Peter Sellers, The Goons to the groundbreaking satirical "That Was The Week That Was". It was this pedigree of comedy and tape effects that would cement his relationship with The Beatles, who were themselves huge Goons fans. 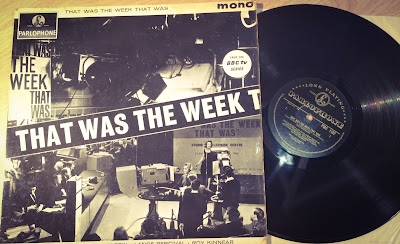 The Rubber Soul to White album "golden years" contains many of the tape effects that many believe where at the vanguard of a new sound. In fact, Les Paul had used different recording speeds back in the 1950 on his album "The New Sound". The first Beatles track to use a tape different speed was also the first Beatle song that George Martin performed on.

Misery was recorded on the infamous day long session of February the 11th, on which the bulk of their debut album was recorded. On February 20th, with the Beatles out touring with Helen Shapiro, George Martin added some piano embellishment first heard after the line "I Remember all the little things we done..."  The standard speed for the twin track EMI BTR tape machines was 15 ips (inches per second). To facilitate playing the tricky piano run, the track was bounced onto another machine that ran at 30 ips, the overdub was then performed an octave lower at half the speed (15 ips), which when played back at the original speed gives the piano sound a unique timbre. Martin would again use this approach for the baroque piano solo in Rubber Soul's "In My Life". 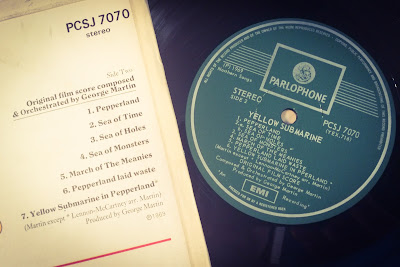 His creative input into The Beatles is immeasurable, it was his idea for the crashing chord at the start of "A Hard Day's Night" which he also played piano on and starting "Can't Buy Me Love" with the chorus.

Together with a long and winding list of artists and industry awards that would need eight arms to hold them, George's work as an arranger and composer, leaves behind a staggering legacy of achievement.