Creatively, it's been a strange year for me.  After some soul searching and an injection of reality, I regretfully gave up Galileo 7 bass duties last year in the main to concentrate on Billy Wears Dresses, it would seem however that I was surplus to requirements in that department!
This however has given me the impetus to write for myself and in the near future, I'm hoping to get a new band on the road.
For a snippet of these, have a listen at  http://m.soundcloud.com/paulmossuk
Whilst I've still been busy earning a crust from music, there really is no comparison to getting on stage with original material. So it's with great pleasure that this Thursday 25th of July, The Lovedays reunite at The Alleycat Club, Denmark St. in London.  I've had the pleasure of working with some amazing musicians over the years, but this combo is a truly unique experience, and I say that as a fan and a member. Let me explain...
I first saw Ben Jones perform solo in 2007 at a jam night, I was immediately captivated and was surprised he didn't have a band at the time. It wasn't until the following year that I saw The Lovedays for the first time and instantly became fan, playing the debut album to death as soon as it arrived. In early 2009 I got a phone call from Ben asking me if I could dep at a gig, I remember it well as I was in Orlando at the time, fortunately it was the day I arrived back in England. I landed at 7am, then spent the afternoon learning the songs and with no rehearsal did the gig. I must have got something right as the next day Ben & Sam asked me to join.
So once again we the hit the boards and play as if our lives depended on it. I can't wait. 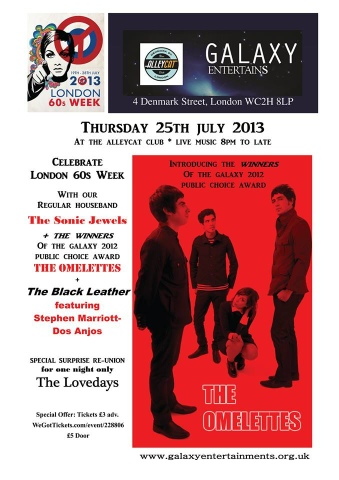