Look Who's Arrived Too - Who Hits 50 & Brunswick Box Set 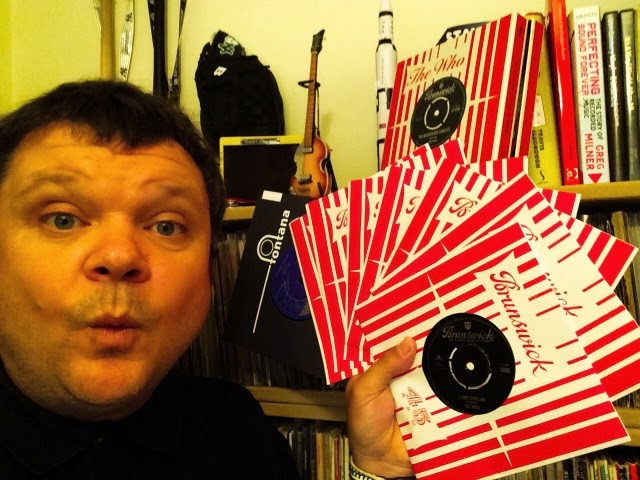 Each lustrum seems to bring with it a new compilation of Who hits, compendiums or as noted in the inner sleeve of “Hits 50”, a taster. Originally scheduled for last year to coincide with the digital release, the double LP has finally arrived and to my surprise sounds pretty good. It’s been half speed mastered at Abbey Road and most of the tracks sound better than they have for years. The track listing follows the standard digital editions (there are expanded CD & download versions available)

Interestingly this album kicks off with the High Numbers (The Who’s previous incarnation) Zoot Suit, before moving onto the mono single versions of I Can’t Explain, Anyway Anyhow Anywhere, My Generation  Substitute and I’m A Boy. Happy Jack is the US stereo mix, followed by the mono Pictures Of Lily. All sound tight and clear and without the claustrophobic compression that has tarnished all of the compilations over the past 20 years. Sadly the version of I Can See For Miles is the stereo LP version rather than the superior single mono mix, curiously Magic Bus is a mono mix of the Meaty Beaty Big & Bouncy extended version. After Pinball Wizard & The Seeker is the single edit version of Won’t Get Fooled Again. Personally I’d rather have that on here as the full version is available on Who’s Next, but in terms of what would be best for a “taster” for the Who I’m not sure it’s the right choice. So having Baba O’Reily & Bargain, both album tracks up next is a bit of a shame, I’d prefer “Let’s See Action” & “Relay” here. Join Together follows and is the first track on the LP that sounds thin – I’m pretty sure I’ve heard fuller and better versions of this. 5:15, Squeeze Box & Who Are You follow, the first and last of these being the single mixes. Looking at the track listing, I was surprised that “You Better You Bet” was left out instead of a radio edit of Real Good Looking Boy, however listening to this song is a real revelation over digital versions I have of this. It sounds so dynamic and really “breathes”, hopefully the full version & Old Red Wine will get a vinyl release.

The Who Hits 50 is a great place to start your Who Collection or if you wanted to own one Who vinyl record this is as good a place to begin as anywhere. It’s not perfect but it is I guess a taster.

Another arrival has been The Who Brunswick Singles box,these cover the first six singles released on the Brunswick Label along with an unreleased single and a bonus Fontana label 45 of The High Numbers “Zoot Suit”. The Brunswick label in the sixties was owned by American Decca and usually used for American Decca releases in the UK. Like the Who Hits 50, these were half speed mastered at Abbey Road. Opening up the box reveals a small booklet with some great pictures, some of which I’ve never seen along with the 8 singles in excellent replica sleeves. First on the turntable, “I Can’t Explain”, of all the singles in this set, this one blows me away, I’ve never heard it sound so good. Back to back with an original Brunswick 7” version this has so much more “balls” and bottom end. Often the bass end was removed on singles of this period to stop cheap record players from jumping, this re-issue has more bottom end and overall clarity. A/B’d with other versions (Meaty Beaty/ Who Hits 50 included) and this still is the best I’ve ever heard any early Who sound. There isn’t such as big a difference on the other singles, Anyway Anyhow Anywhere, My Generation, A Legal Matter & TheKids Are Alright but I think they still sound superior to their originally pressed counterparts. La-La-La Lies (the last Who Brunswick single) packs a punch that is missing from the LP version and Instant Party has all the “horn” overdubs that have sometimes been missing on compilations re-releases. Again The Kids Are Alright is the full version as per the original UK single release. The unreleased single “Circles” is included here, this is exactly the same song as “Instant Party” and features exactly the same mix. The story behind this will be detailed in an appendix, however it is a nice addition to the set. On the B-side is a song called “Instant Party Mixture” that was first released on the My Generation Deluxe version CD. The great news is that this mono remix that features the complete song (the cd version faded out).

Given the rarity of The High Numbers “Zoot Suit / I’m The Face” (only 1000 were ever pressed) this is a welcome addition to this set. Both songs sound better than I’ve ever heard them elsewhere on a myriad of compilations, sadly I don’t have an original pressing but I suspect like the Brunswick singles, modern cutting techniques have improved the finished product.

I’m very impressed by this box set and is a must have for any Who fan. I’m genuinely excited for the next three scheduled single box sets. 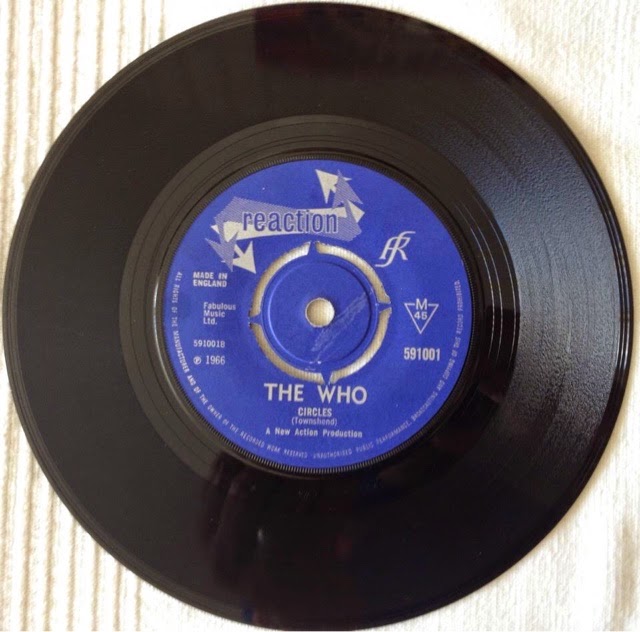 The Who - Substitute / B side Circles
Are you sitting comfortably? Then I'll begin.
The Who at the beginning of 1966 were signed to Shel Talmy & US Decca. Like most bands early in their record contract, they soon found that they were earning a pittance for their record sales and along with The Who's management team "Kit Lambert & Chris Stamp" they wanted out of it. So after recording a song called "Circles" which was earmarked to be the next single, The Who jumped ship to Robert Stigwood's Reaction Label and recorded "Substitute" and re-recorded "Circles" and released on 4th March 1966. The Who - Substitute / B side Instant Party
Whilst this looks like a different song on the B side it's actually the same track, which continues to fool ebayers today, in actual fact it's more common than the "Circles" named B side. It would seem that after the original gung ho approach of the original pressing, this alternatively named single was pressed up before the release date. 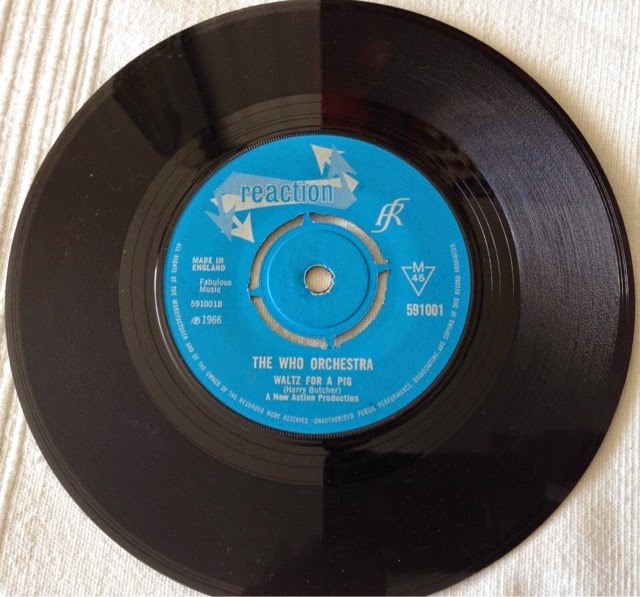 The Who - Substitute / B side Waltz For A Pig
Within days of the original release Shel Talmy had an injunction, forcing Reaction to stop issuing a song that was the "property" of Talmy and US Decca (the song Circles). So with the usual wit and charm of The Who, The Graham Bond Orchestra under the moniker of The Who Orchestra, supplied the B- Side politely entitled "Waltz For A Pig" 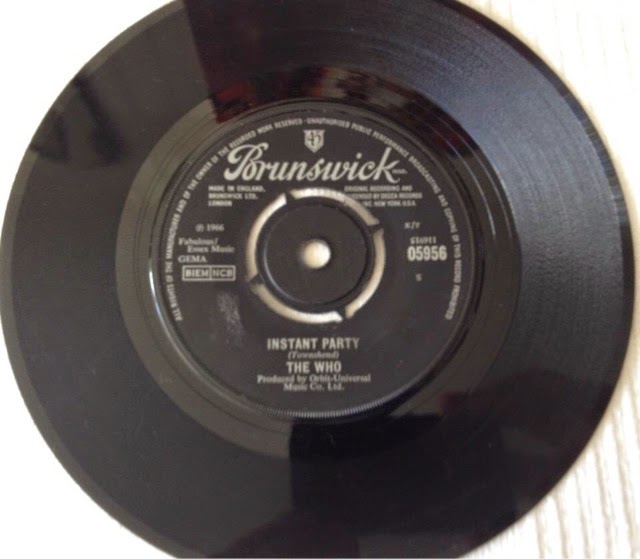 The Who - A Legal Matter / B side Instant Party
In many ways, Shel Talmy had the last laugh, not through this feeble attempt at humour on the A side or the renamed version 1 of "Circles" on the b-side, but in court. Shel Talmy earned a healthy royalty on all future Who recordings, through Tommy, Live At Leeds & Who's Next. The Who however, got their wish to remain with Reaction 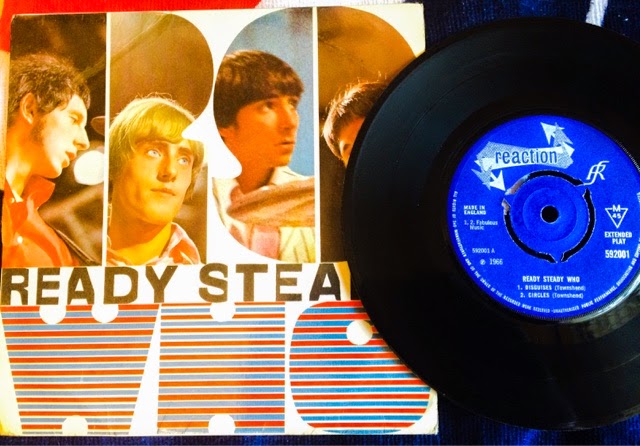 The Who - Ready Steady Who EP
The song Circles rears it's head again on this EP, originally released on 11th November 1966. Although this EP infers that its recorded live on the pop program "Ready Steady Go", it was recorded in the studio and Circles is the version 2 that was originally the Substitute B side.

Email ThisBlogThis!Share to TwitterShare to FacebookShare to Pinterest
Labels: The Who hits singles box set