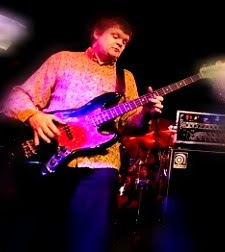 It's that weird "no mans land" time between Christmas & New Year again, a time to look back and forward, assess and review, along with umpteen programs on the best celebrity moments of 2010.

Here's a few nuggets from the bass case then:-

January - The Snow & Billy Wears Dresses & The Walnut Tree in Loose, not the other venue with the same name that everyone turned up to see us at.

February - The Lovedays 2nd album "House Of Cards" is released at The Barge. The first Galileo 7 gigs, Ghent (Belguim) then Sittard (Holland).

March - Panic in the orchestra pit at The Broadway Theatre London. "Monkey Trousers" 7" single by Groovy Uncle is released.

May - The Galileo 7 in Paris, brilliant gig but how much for a beer?? Recording again with "The Uncle" at State Studios". Victor Wooten clinic - WOW. The Lovedays back at the Cavern in Liverpool, time we got our own brick in the wall ehh?

June - Billy Wears Dresses play on a kerb just outside Bluewater, can we laugh about that yet? Stevie Wonder at Hyde Park, best gig ever. The Lovedays at Peter Parkers in London, how long will that venue remain, err not long, gone already.

July - The Lovedays, main stage, Lounge On The Farm; see, it does work on a huge stage. The Lovedays at the Style & Winch, the last ever Lovedays gig? Billy Wears Dresses take up residence at the Beauty Of Bath then serenade Maidstone from the bandstand in Brenchly Park.

August - The Galileo 7 photoshoot with the fabulous Phil Dillon, Masterclass photo shoot with Martin "the lens" Whale. Farewell Mike, save me a seat at the bar. Scotland with Wee Willie Harris. Galileo 7 @ Medway Happenings, almost didn't thanks to the summer weather!

September - Billy Wears Dresses back in the studio, Nick fixes Jon's car. A drunken appearence on the Las Vegas Strip.....

October - Masterclass bring the house down, when Dean get's there with a working amp that is.

November - Huge Galileo 7 tour of europe to promote the debut album "Are We Having Fun Yet?" Somebody buy some merch!!!!! Premiere of "The Key To The Trapdoor" Lovedays documentary is screened in Rochester, I still haven't seen it. It's that "switch those festive lights on again time of the year" for Billy Wears Dresses.

December - The snow, again! Masterclass in France, watching Dean & Sam wrestle at 2am, I wished I'd videoed it!

I'd like to say a big thank you to all my band mates of Billy Wears Dresses, The Galileo 7, The Lovedays & Groovy Uncle, Along with Barry "The Teacher" Kitchin.

As always, all my love to Sue & Harrison. I couldn't do it without you.

Let's all have a drink and toast to "World Peace",

Happy New Year and thank you for listening. 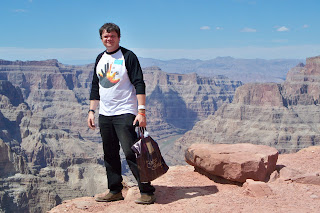 With a hectic run up to Christmas it's easy to forget the important things in life, Family & Friends.
I'd like to wish everyone a Merry Christmas, Happy Holidays and peace.

It's also the time of year to be aware of those not so fortunate, the homeless, the alone, the bereaved, those who have to work over the festive season such as emergency services and troops.

Let's try and make the season of goodwill, just that. 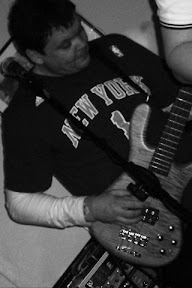 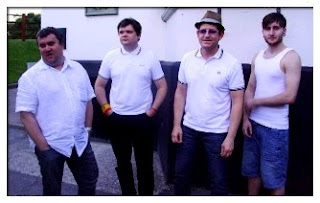 This Thursday, 23rd December will see Billy Wears Dresses at The Eagle Tavern in Rochester.
A superb venue and always a busy night so get there early for a good view.
We will be playing all the regular hits as well as songs from the forthcoming album "You Said It Would And It Did".

The debut Galileo 7 is getting some rave reviews, here are two :-
Modculture
Sohostrut
Posted by Unknown at 08:07 No comments: 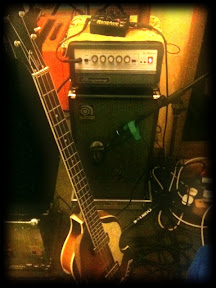 Here is a review of the debut album:- 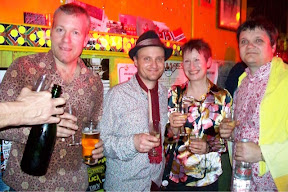 
With a CV that includes The Prisoners, The Solarflares, JTQ, Thee Headcoats and The Stabilisers, it's fair to say that Allan Crockford is a well respected veteran of the Medway area's garage rock scene. The Galileo 7 formed as a vehicle for his own material and this storming 14 tracker on Teen Sound is their debut release.

'Never Go Back' is a blistering opener - a snarling Crockford vocal and swirling organ from Viv Bonsels backed by a thumping rhythm section (Paul Moss and Russ Baxter), and all melded together with some furious guitar and glorious harmonies. It merges straight into 'Something Else', a gutsy slab of freakbeat meets mod pop.

The delightfully titled and psych-y 'Orangery Lane' brings to mind both Syd Barrett-era Pink Floyd and XTC's alter-ego spin-off band The Dukes Of Stratosphear, while at the same time sounding completely original! The stomping 'Mine! Mine! Mine!' and the lighter 'The Sandman Turns Away' are two more impressive melodic cuts.

The energetic 'Run Baby Run' and 'Feet On The Ground' are both killer tunes, while the thunderous power pop of 'Go Home' is followed by the groovy instrumental 'Feed The Meter'.

The dreamy 'Running Through My Hands', the tour de force that is 'Can't Resist' and the relentless 'The Best Way Is Our Way' bring proceedings to a close in style.

Jim Henderson presents "Power Pop" on Get Ready to ROCK! Radio, Sunday 18:00 (first and last Sunday of each month)

It's a busy build up to the Festive season, Masterclass are off to France this weekend, in the studio and live next week with Billy Wears Dresses & Galileo 7.
What shall I do with the other hand?

Count On Me - Groovy Uncle

Over the Summer I was in State Studios with the legendary Groovy Uncle, contributing to the forthcoming LP "Play Something We Know" on State Records. Here's a taster of what's to come with a video shot at the Medway Little Theatre in November.


For all things Groovy Uncle check out the Official Website
including a shop where you can buy the Groovy Uncle 7" "Monkey Trousers" also featuring yours truly!
Posted by Unknown at 08:24 No comments:

The Billy blog is temporarily out of action so I'll update it from here. 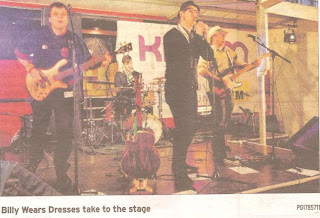 We've just finished doing the around Kent / KMFM Christmas lights switch ons, we'd like to thank every one at the KM / KMFM team, sound light & stage crew and everyone that braved the artic temperatures to come & see us. They were great fun and the final one in Tonbridge saw a phenonamal crowd of 4500 + turn up. The Billy facebook friends have taken a well earned boost! To join in click HERE

We have two up coming Christmas shows:-

Both start at 9pm and are free entry.

The recording of the new album is nearing completion, we are only a handful of tracks away from finishing and then will have about 17 new songs to choose from. As yet we only have a working title but the photo shoot; for which we have a very definate plan, should be done quite soon. At the moment the release date is looking like March 2011. Meanwhile we have a handful of Space Hopper Summer albums left which will be on sale at our Christmas gigs for the festive price of £5. as well as being available on iTunes.

The Official Billy Wears Dresses site will be going through a major overhaul soon so keep an eye out for that. Until then don't forget to take a look at the Billy Watchers site for some superb insight to all things Billy Wears Dresses, including stuff even we didn't know!

Finally there is the Billy Wears Dresses Twitter for the hard core.

Hope to see you over the Festive Period,

Paul
Posted by Unknown at 05:30 No comments: