Now before you start sharpening your green pencils, this isn’t a “vinyl is better than CD” diatribe. As we shall see, analogue and digital are capable of High Definition and lower resolution listening experiences.

The Beatles digital story begins with the original CD’s that were released in 1987, Please Please Me, With The Beatles, A Hard Day’s Night & Beatles For Sale in Mono (finally the Beatles did have the power to choose and veto the releases) Help & Rubber Soul were remixed in Stereo by George Martin while the rest of the catalogue was released in stereo with the exception of Past Masters 1 Tracks “Love Me Do”,” She Loves You” and “I’ll Get You” and Past Masters 2 “You Know My Name (Look Up The Number)”. All of these releases were re-mastered.

CD’s were developed by Sony & Phillips and in technical terms use a two channel signed 16-bit Linear PCM sampled at 44,100 Hz (Phew) In simpler terms, 44.1 Hz is the digital sampling rate (how many pieces of information per second, in this case 44,100) and 16 bit (how much information per piece, in this case 16) all of which is usually referred to as 44/16 in digital audio. Now to convert analogue audio into digital audio information requires a DAC (Digital Audio Converter). The early 80’s DAC’s were considerably less efficient than they are now and many of the early CD releases suffered from thin and harsh sound. However, in my view the original Beatles CD’s sound OK, like many others at the time we believed that you wouldn’t be able to buy records in 5 years’ time and the quality of new turntables etc. that were for sale was pretty awful. (I will confess, that I should have looked harder! But in general, this was the overall feeling at the time.)

Fast forward twenty years and these original CD’s were looking rather tired. The nineties had seen the release of the Anthology series and the remixed version of the Yellow Submarine album (minus George Martin’s soundtracks and with other Beatle songs included in the film). Along with 2003’s Let It Be Naked, Yellow Submarine’s remixed versions sounded warmer and punchier than the eighties CD versions. Paul’s bass on “Hey Bulldog” sounds much heavier and clearer and the whole song has a much more “in the centre” mix than the former wide panned version. Whilst some quarters of the “Beatleista” were up in eight arms over these re-mixes, they certainly did highlight the need for these classic songs to be given the respect they deserve.

2006 saw the release of LOVE, music for the Cirque du Soleil show of the same name, which was in my view, very cleverly re-mixed & mashed by Giles Martin, overseen by his father George. At this time, Abbey Road were converting the original stereo & mono master tapes to 192/24 digital using a flat EQ. (192 Hz/ 24 bit – Flat EQ means that no frequencies or treble & bass were added to these conversions). This was a necessary archival process that would be the beginning of a wash & brush up that was needed for the new re-mastered CD’s, along with any future downloads, if and when the legal wrangling with Apple Computers were resolved.

The Beatles re-mastered CD’s were released as a stereo box set, a limited edition mono box set and individual stereo albums in September 2009. The original 192/24 archival files were reduced to 44/24 digital files for final mastering and then truncated to 44/16 for the CD releases.  To my ears these re-masters sound warmer and clearer than the original CD’s, with the exception of the mono/stereo issue which I covered in part one and pirate mono box set copies which I’ll cover in the future, all seemed well, albeit a medium resolution one.

2010 saw the release of The Beatles on iTunes, whilst iTunes AAC format (like MP3, this is still a compressed lower quality format) won’t have the fidelity of the CD versions, those who love their FLAC might be able to scour Ebay for the Apple shaped USB stick, although even these are still 44/24 files. Downloads in general are a much trickier area to compare as it’s not just the resolution of these files that has a bearing on their quality, there are good & bad encoders that your digital music may pass through before it gets to you. The good news is that more recently, High Resolution Digital Audio is being taken more seriously, to find out more visit - http://www.whathifi.com/news/high-resolution-audio-everything-you-need-to-know

2012 saw the release of the vinyl version of the stereo box set, however this time all was not fab.

Digital folk love their numbers, as all of the ones I’ve needed to include in this blog entry  seem to attest to. In terms of comparing these figures to analogue, whilst some have tried to guesstimate this number and come to some pretty insane calculations based on the molecule count in magnetic tape, most audio professionals seem to think that 192/44 is pretty close to what an analogue master tape can produce.

As audiophiles played their new Beatle records, they knew something was wrong. Listening to “Because” on Abbey Road, the original engineer Geoff Emerick was horrified at how compressed these beautiful vocals had become. The list went on. So it was no surprise when Sean Magee, Abbey Road cutting engineer for these releases confirmed that they had been cut from the 44/24 digital masters that were used on CD. There were also concerns about vinyl quality, warping and excess surface noise.

Cd’s & downloads are convenient. We can listen to them on the move; we can carry them around in our pocket; I for one do not miss the sports bag of cassettes that I used to drag around with me. On the other hand, if in late 2012 I wanted to listen to The Beatles in high definition, I couldn’t walk into a record store (the ones that are left anyway) and buy one, in either analogue or digital format.  Remember, this isn’t some rare and obscure artist; I’m asking for one of the most well-known and renowned albums in recorded history.

So no high definition for me then…… 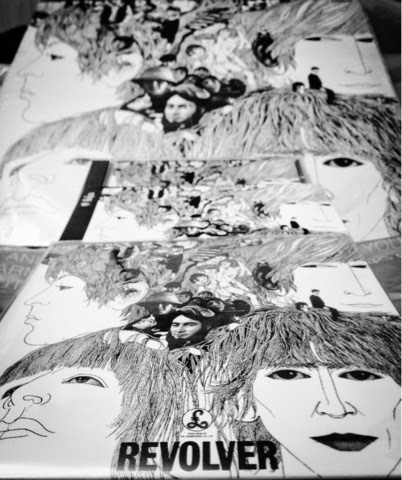