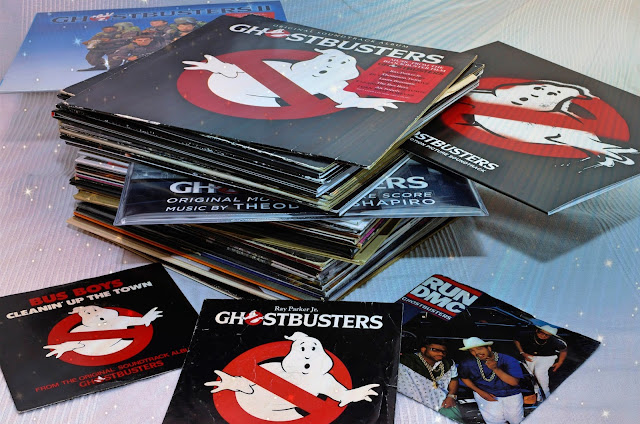 
For those of you who follow me on Facebook or Twitter, my almost too sick to survive devotion to Venkman, Stanz, Spengler & Zeddemore will come as no surprise. So along with spores, moulds and fungus, I’ve got a reasonable though not a biblical proportion of Ghostbusters vinyl records. 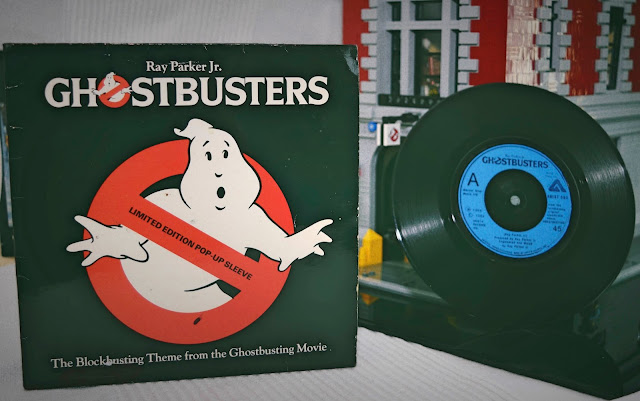 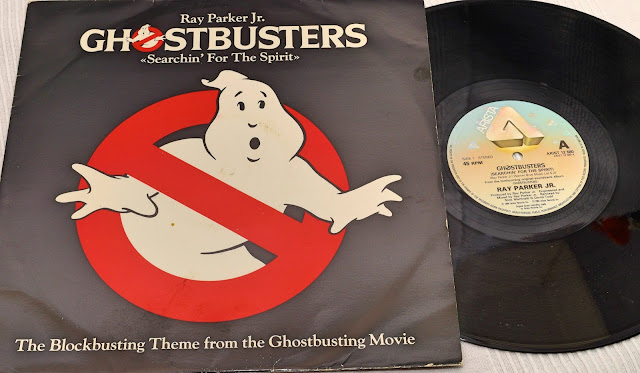 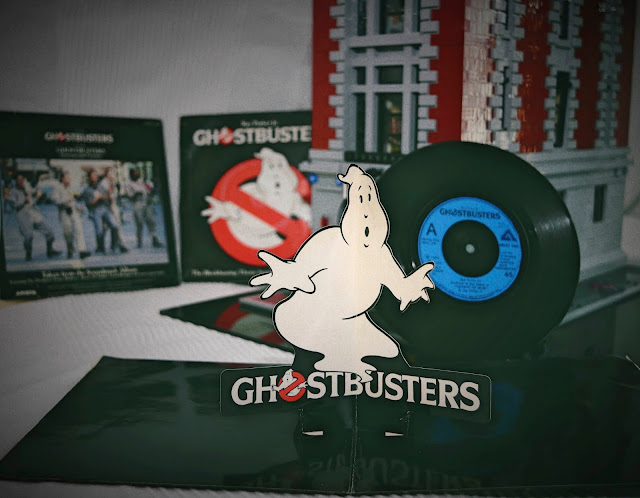 My favourite is the 7” with a pop up sleeve, along with two picture discs, one shaped and one luminous. 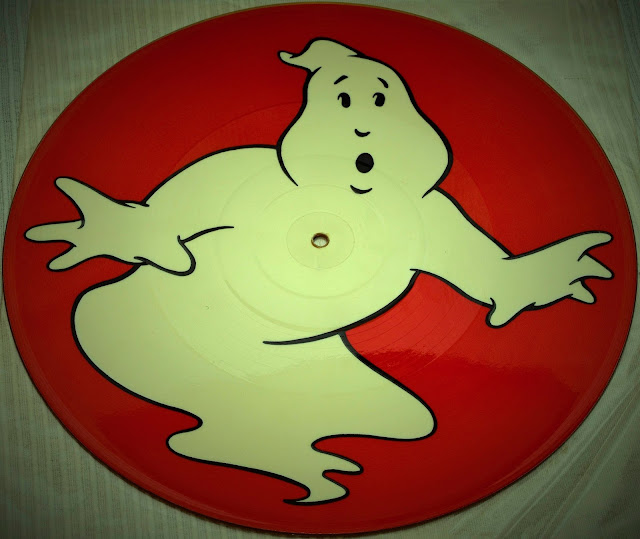 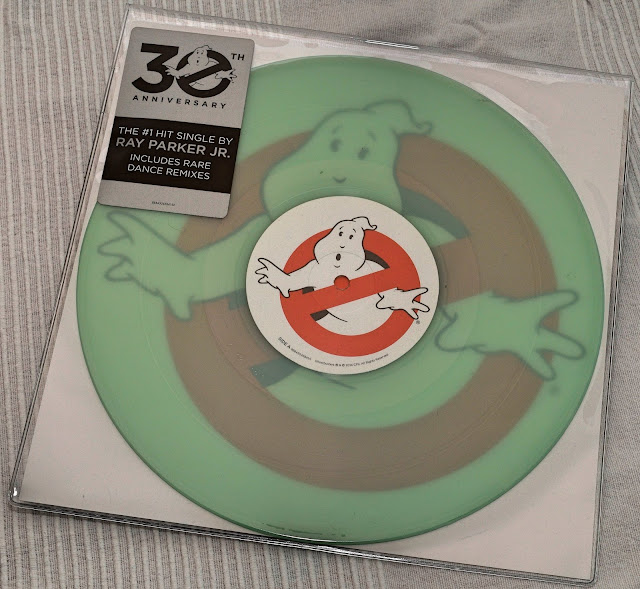 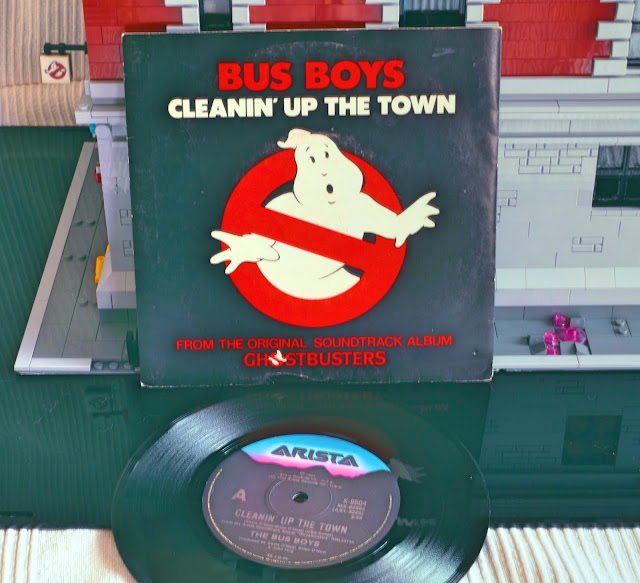 For the American, Canadian and Australian markets, a second single was culled from the soundtrack LP, The Bus Boys “Cleanin’ Up The Town”. This is the Australian release. 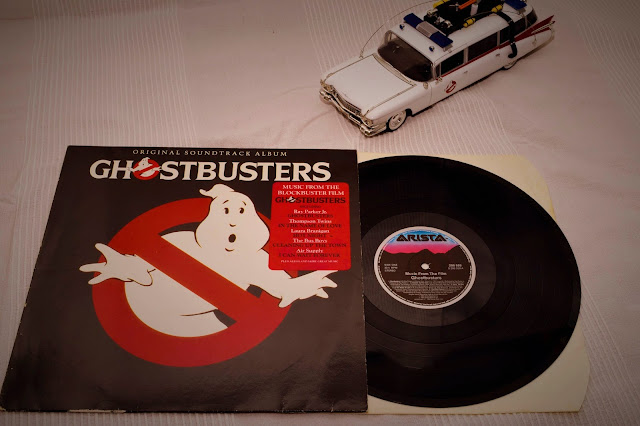 The original soundtrack LP was released on Arista for most of the world, an eclectic mix of songs that all make an appearance at some point in the film.


1.    Ray Parker Jr. “Ghostbusters” –first head after the librarian gets scared in the library


2.    The Bus Boys “Cleanin' Up The Town” – first heard after the Ghostbusters approach the library ghost


4.    Thompson Twins “In The Name Of Love” – heard on the radio while the Ghostbusters  enjoy their final petty cash Chinese meal


5.    Air Supply “I Can Wait Forever”    - heard on a passing workman’s Sony Walkman headphones as the Ghostbusters get thrown off campus.


6.    Laura Branigan        “Hot Night” -played at Louis Tully’s 4th anniversary of being an accountant party. Also The Trammps “Disco Inferno” is played, this would appear on the 2006 CD re-issue)


30 years down the line and the original soundtrack was re-mastered and released. Now for whatever reason, call it fate, call it luck, call it karma, some of the tracks (most notably The Bus Boys song) sound like the original tape masters have been damaged, which is apparent on all of these vinyl re-issues. 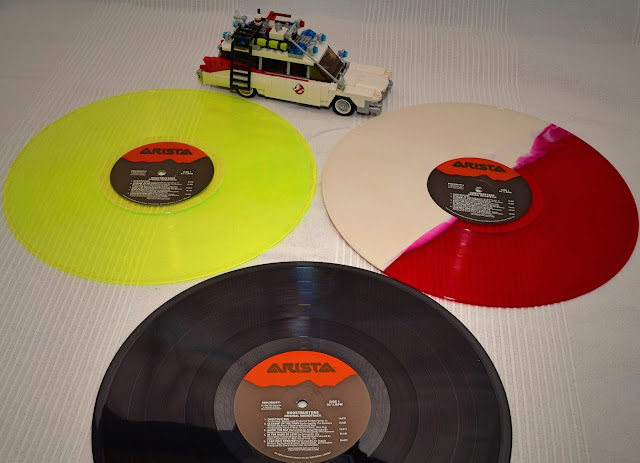 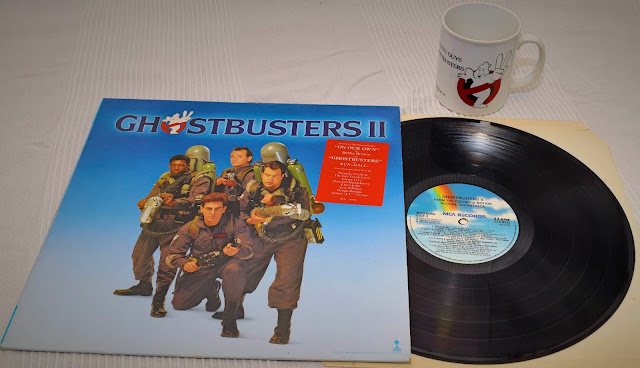 For Ghostbusters II there was less on offer outside of the soundtrack album. The title track “On Our Own” by Bobby Brown in 7 & 12” format, Run DMC’s take on the Ray Parker song (the single has a different mix to the lp) and a 12” version of “Spirit” from Doug E. Fresh And The Get Fresh Crew. 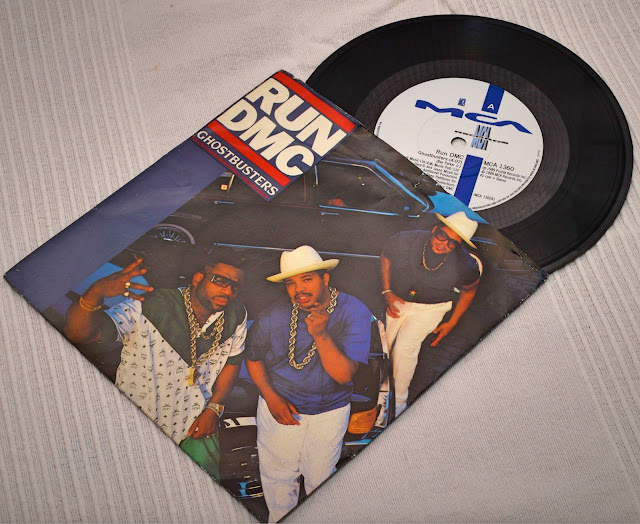 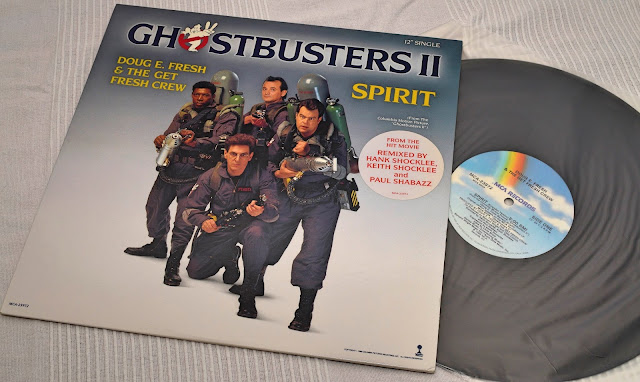 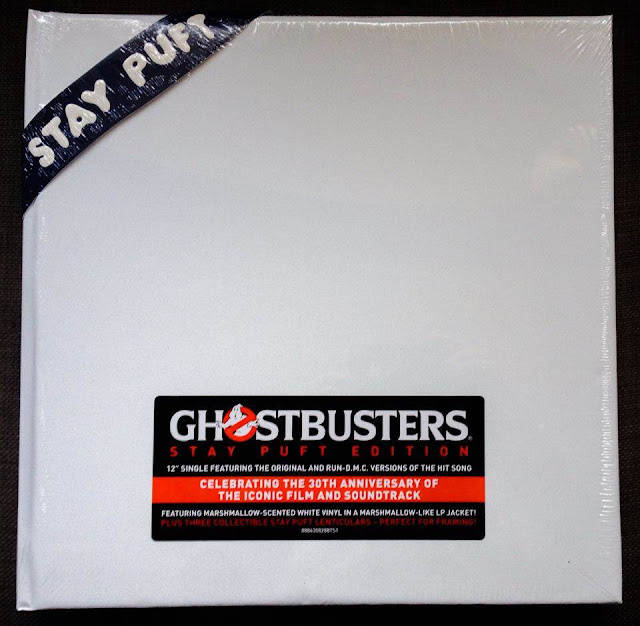 2014 saw one of my favourite Ghostbusters vinyl releases with the Run DMC version backing the original. A 12” marshmallow scented Puffy gatefold jacket which simulates the feel and texture of a marshmallow along with lenticular 3D prints; it’s the sort of record that just popped in there. 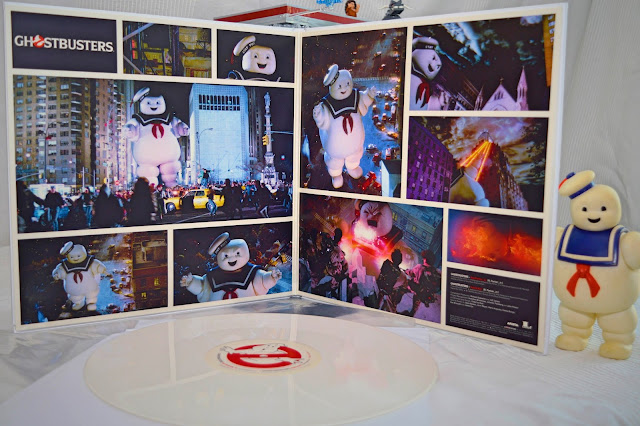 2006 saw the release of Elmer Bernstein’s wonderful score for the first movie. Limited to 3000 CD copies released by the Varèse Sarabande CD Club, this sometimes pops up on eBay for the price of a third mortgage. You can currently stream this on You Tube, but this really deserves to be given a proper vinyl reissue. 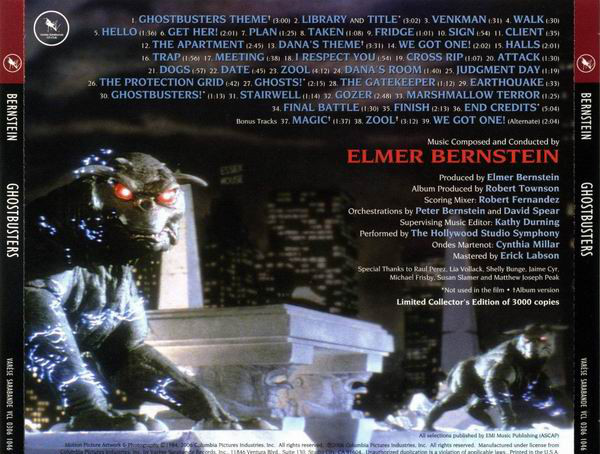 When I heard about the new 2016 film in production and being called a re-boot, I was sceptical to say the least. I’m struggling to think of a previous re-make (call it what you will) that I’ve enjoyed, let alone surpasses the original. Robocop, The Fog, The Omen, Godzilla, Total Recall, Arthur and of course the noxious, possibly hazardous waste chemical that is The Italian Job has taught me to not look directly at the latest Hollywood trap. However, the incessant barrage of sexist and racist trolling from certain quarters (some call them fans, I call them Wally Wicks) made me put all of my prejudices aside and view the film with an open mind. I’m glad I did, it’s a very funny and an excellent romp that I felt compelled to go back and watch again (in 3D the second time). I’d urge everyone to view it in the same way, just make sure you stay to the very end, past the ending credits. 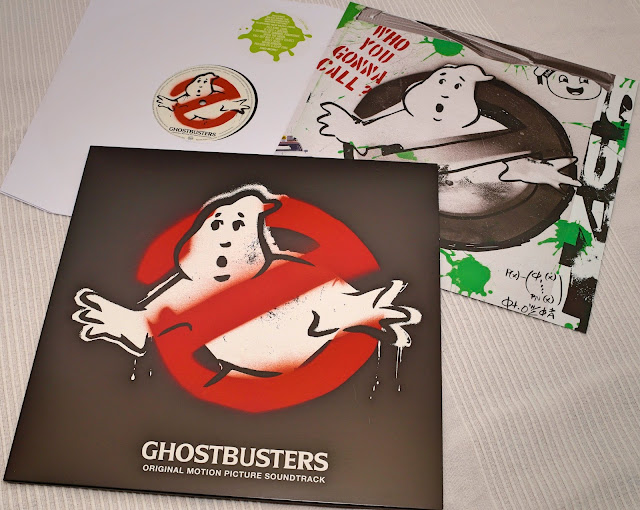 For the new movie two vinyl LP’s have been released, one with songs from the film and the other being the soundtrack score. The new album is well packaged, just a shame the art department didn’t get together with the disc cutting department as the final song on side one is shown on the sleeve as the first song on side two, also the download code that should be printed on the inner sleeve is missing. The songs feature some fairly good remakes of Ray Parker’s original, along with tracks from Ellie King, 5 Seconds of Summer and Mark Ronson, plus some DaBarge and the Ray Parker’s Ghostbusters that go to make this an album that is worth burying the needle on. 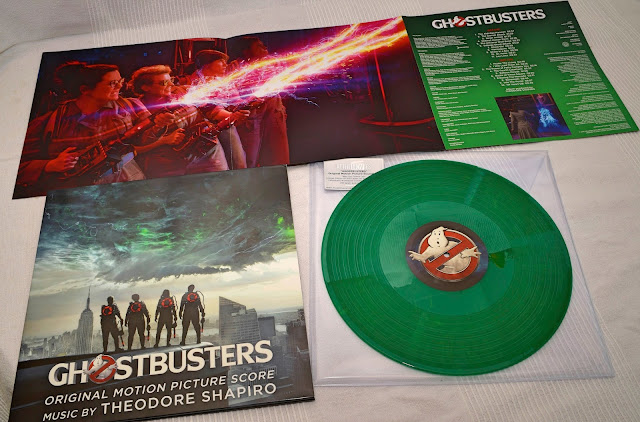 The quality of the new soundtrack score is stunning, whilst the score itself is way short of Bernstein’s original (as is the GBII soundtrack, which is as yet unreleased) the beautiful slime vinyl and stylish packaging is supreme. This limited package of 500 (you are looking at number 6) from Sony's “At The Movies” series will serve all your supernatural needs. 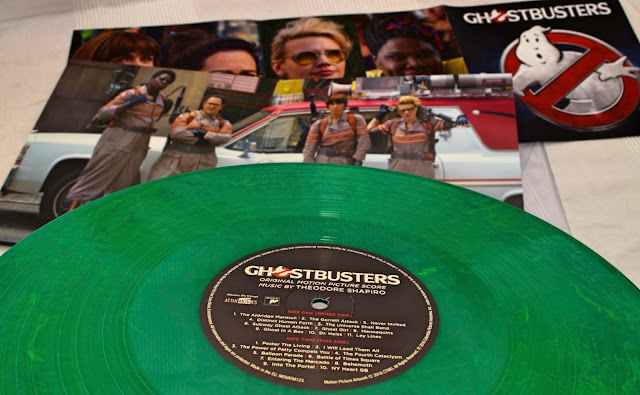 Finally, if you want to hear the original album at its very best, (bearing in mind the re-mastering issues I mentioned earlier) I’d recommend this 1984 version from Japan which can really bust some heads, in a spiritual sense. 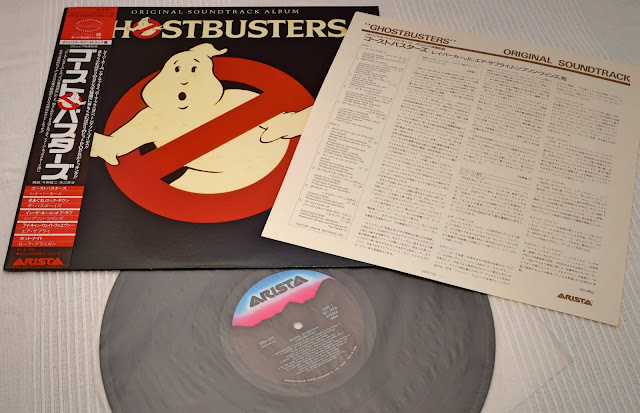 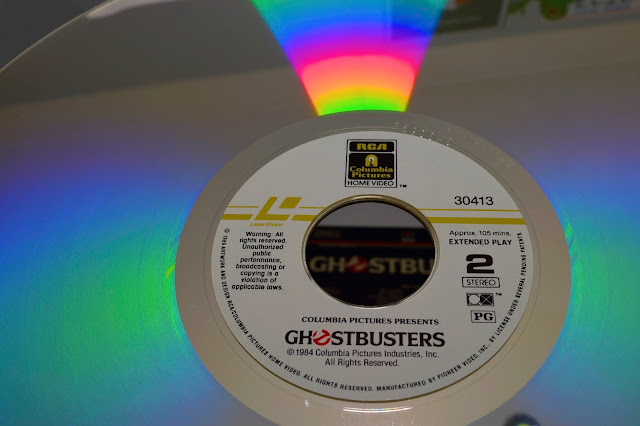 No this isn’t a very shiny space record, it’s a laserdisc.


The forerunner to DVD.


Never ever put one of these on your turntable. 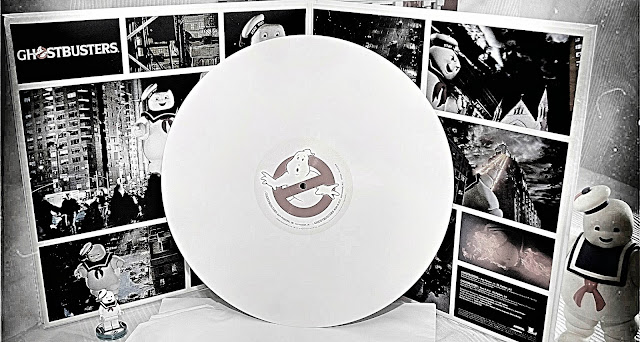